FOR THE WIFE
WHO SAYS IT'S HOT DOGS TONIGHT,
BECAUSE SHE IS HOME WITH ME,
AND NOT OUT WITH SOMEONE ELSE.

FOR THE HUSBAND
WHO IS ON THE SOFA
BEING A COUCH POTATO,
BECAUSE HE IS HOME WITH ME
AND NOT OUT AT THE BARS.

FOR THE TEENAGER
WHO IS COMPLAINING ABOUT DOING DISHES
BECAUSE IT MEANS SHE IS AT HOME,
NOT ON THE STREETS.

FOR THE TAXES I PAY
BECAUSE IT MEANS
I AM EMPLOYED.

FOR THE MESS TO CLEAN AFTER A PARTY
BECAUSE IT MEANS I HAVE
BEEN SURROUNDED BY FRIENDS.

FOR THE CLOTHES THAT FIT A LITTLE TOO SNUG
BECAUSE IT MEANS
I HAVE ENOUGH TO EAT.

FOR A LAWN THAT NEEDS MOWING,
WINDOWS THAT NEED CLEANING,
AND GUTTERS THAT NEED FIXING
BECAUSE IT MEANS I HAVE A HOME.

FOR ALL THE COMPLAINING
I HEAR ABOUT THE GOVERNMENT
BECAUSE IT MEANS
WE HAVE FREEDOM OF SPEECH..

FOR THE PARKING SPOT
I FIND AT THE FAR END OF THE PARKING LOT
BECAUSE IT MEANS I AM CAPABLE OF WALKING
AND I HAVE BEEN BLESSED WITH TRANSPORTATION.

FOR MY HUGE HEATING BILL
BECAUSE IT MEANS
I AM WARM.

FOR THE LADY BEHIND ME IN CHURCH
WHO SINGS OFF KEY BECAUSE IT MEANS
I CAN HEAR.

FOR THE PILE OF LAUNDRY AND IRONING
BECAUSE IT MEANS
I HAVE CLOTHES TO WEAR.

FOR WEARINESS AND ACHING MUSCLES
AT THE END OF THE DAY
BECAUSE IT MEANS I HAVE BEEN
CAPABLE OF WORKING HARD.

FOR THE ALARM THAT GOES OFF
IN THE EARLY MORNING HOURS
BECAUSE IT MEANS I AM ALIVE.

The Farmer and His Mule

A story is told about a farmer’s mule that stumbled and fell into an abandoned well. It created a serious problem. The mule was one of the farmers favorite animals, but much too heavy to lift out.

After a great deal of thinking the farmer came up with a plan. He called his neighbors for help. The farmer told them what had happened, and then said, “Bring two things, your wheel-barrow, and a good shovel.”

As the neighbors arrived the farmer put them to work. They began loading their wheel-barrows from a nearby pile of dirt and dumping it down the well onto the mule.

In the beginning the mule was frightened, but as the neighbors worked the farmer spoke gently to his mule and before long things started to happen as the farmer had planned. When a load of dirt came showering down, the mule did not panic. She shook it off, looked up to see her owner was still there, and took a step up.

Load after load of dirt came showering down on the mule, and with each new strike the mule simply shook it off, looked up to see where she was and took another step up. Before long, though battered and exhausted, the mule stepped over the wall and onto fresh green grass.

Life is sometimes like this story, but if we will face our problems like this mule did we will not panic or be full of self-pity. When things happen that seem ready to bury you, simply “Look up and Step Up.”

“Be strong and of good courage, do not fear or be afraid of them; for the Lord your God, He is the One who goes with you. He will not leave you nor forsake you.”   Deuteronomy 31:6 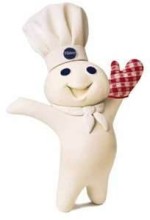 The Pillsbury Doughboy died yesterday of a
severe yeast infection and complications from repeated pokes to the belly.

Doughboy was buried in one of the largest funeral ceremonies in recent years. Dozens of celebriteis turned out, including Mrs. Butterworth, the California Raisins, Hungry Jack, Betty Crocker, the Hostess Twinkies, and many others. The graveside was piled high with flours, as longtime friend, Aunt Jemima, delivered the eulogy, describing Doughboy as a man who "never knew how much he was kneaded."

Doughboy rose quickly in show business but his later life was filled with many turnovers. He was not considered a very smart cookie, wasting much of his dough on half-baked schemes. Still, even as a crusty old man, he was a roll model for millions.

Doughboy is survived by his wife, play dough. They have two children and one in the oven.