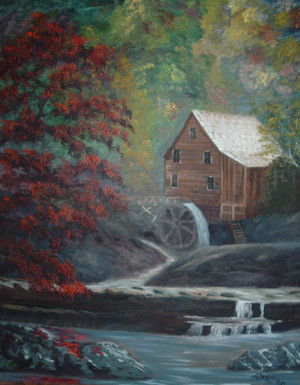 HOW WOULD YOU LIKE TO HAVE A SALVATION THAT YOU DON’T HAVE TO WORK FOR AND YOU CANNOT LOSE? Well, that is exactly what we have in Christ. This is the message of Romans chapters 4 & 5, and for that matter, of the whole Bible.

To lead up to it, the fourth chapter of Romans is a marvelous summary of how God imputes to us a righteous standing before Him on the basis of putting our faith in Him to do as He promised, thus resulting in our justification before Him.

We learn in chapter four, that a perfect righteousness which is acceptable to Him is given to us by God’s grace without any works from us to earn it, deserve it or to keep it. There is no keeping of the law necessary; no ordinance to obey; there is no racial entitlement for it; no perseverance is required in order to keep it; and there is no chance of losing it. The only thing we must do is to put our faith in Him in order to receive it. WOW, and double wow!!

Romans 3:23-28 For all have sinned, and come short of the glory of God; 24 Being justified freely by his grace through the redemption that is in Christ Jesus: 25 Whom God hath set forth to be a propitiation through faith in his blood, to declare his righteousness for the remission of sins that are past, through the forbearance of God; 26 To declare, I say, at this time his righteousness: that he might be just, and the justifier of him which believeth in Jesus. …. 28 Therefore we conclude that a man is justified by faith without the deeds of the law.”

This constitutes our JUSTIFICATION before God as a people saved by God’s grace alone. But what does it mean that we stand before the Almighty Justified? The Greek word means: to be rendered as innocent; to be regarded as justified and righteous. The easy way to explain it is this: Justify means, just as if I have never sinned. We are given a perfect standing before God just as if we had never done anything wrong our whole life. That is what justification before God is.

Here’s the scriptural proof from select verses in chapter four to summarize what the Bible reveals about a salvation which is totally by God’s grace through Faith in Him without any personal good works of our own to deserve it.

Romans 4 2 “For if Abraham were justified by works, he hath whereof to glory; but not before God. 3 For what saith the scripture? Abraham believed God, and it was counted unto him for righteousness. .. 5 But to him that worketh not, but believeth on him that justifieth the ungodly, his faith is counted for righteousness. 6 Even as David also describeth the blessedness of the man, unto whom God imputeth righteousness without works, 7 Saying, Blessed are they whose iniquities are forgiven, and whose sins are covered. 8 Blessed is the man to whom the Lord will not impute sin…. 16 Therefore it is of faith, that it might be by grace; …19 And being not weak in faith, … 20 He staggered not at the promise of God through unbelief; but was strong in faith, giving glory to God…22 And therefore it was imputed to him for righteousness. 23 Now it was not written for his sake alone, that it was imputed to him; 24 But for us also, to whom it shall be imputed, if we believe on him that raised up Jesus our Lord from the dead; 25 Who was delivered for our offences, and was raised again for our Justification.” Mark 11:22 “And Jesus answering saith unto them, Have faith in God.”